Recently I ran into some problems when I upgraded my server to PHP 7.4. The problems were solvable but I figured I’d revert to my installation pre-PHP 7.4 upgrade and then work the issues off-line. But when I tried to re-install my system from a backup, all hell broke loose.

END_OF_DOCUMENT_TOKEN_TO_BE_REPLACED

Ars Technica has produced the best write up on what’s happening with Meltdown and Spectre.

Two days ago, the tech world ran into a wall. Probably the best summation of the event is the following tweet:

For my non-tech followers, specifically my activist followers, you should know that the entire tech industry has been freaking out for the last 36 hours because pretty much all computers are now totally fucked.

Yes, this is about the CPU bug. The CPU bug. The bug that demonstrates that sometimes being clever isn’t the same as being smart. The one that gave us Meltdown and Spectre.

I’m not going to repeat what others have reported, including The Register, the Verge,  Business Insider, and Google. But I wanted to specifically point out a New York Magazine piece because it does a good job of explaining why your IT person is currently under the desk, sobbing. Money section:

So basically every computer in the world is broken for the foreseeable future?
To quote Reverend Lovejoy: Short answer, “yes” with an “if.” Long answer, “no” with a “but.”

We’re likely looking at a world where there are pre- and post-Spectre processors. The lead time for new processors is measured in years, so there aren’t going to be quick fixes. There will be continuous software patches as new Spectre vulnerabilities are found in the meantime.

But the root of the problem for both Meltdown and Spectre is one of unforeseen consequences. Guessing what your computer is going to need to do next is a tremendously clever and relatively cheap way to speed up processors, and once it was discovered, Intel pushed aggressively to see how far they could go with it. (This is why Meltdown has hit Intel so hard.)

Designing processors and computers is an extremely difficult and extremely expensive proposition, and the market incentive for manufacturers is always going to be speed, not security. Even after Spectre disappears from the landscape, it’s a near certainty that some other vulnerability will show up on the scene.

In the meantime, stuff is getting patched. Not fixed…patched.

Microsoft just released an emergency patch (which just showed up on my PC, time to update), the current version of Firefox protects against vulnerabilities, upcoming Android and Chrome updates should help in these environments, Intel is putting out patches, and the fixes go on.

But we’re in this one for the long haul.

For the next two days, when you first access this site, the following image will show, with a form you can use to send your concerns to Washington DC.

The FCC is about to destroy everything we hold dear about the internet, while pretending to serve the public. Don't let them. 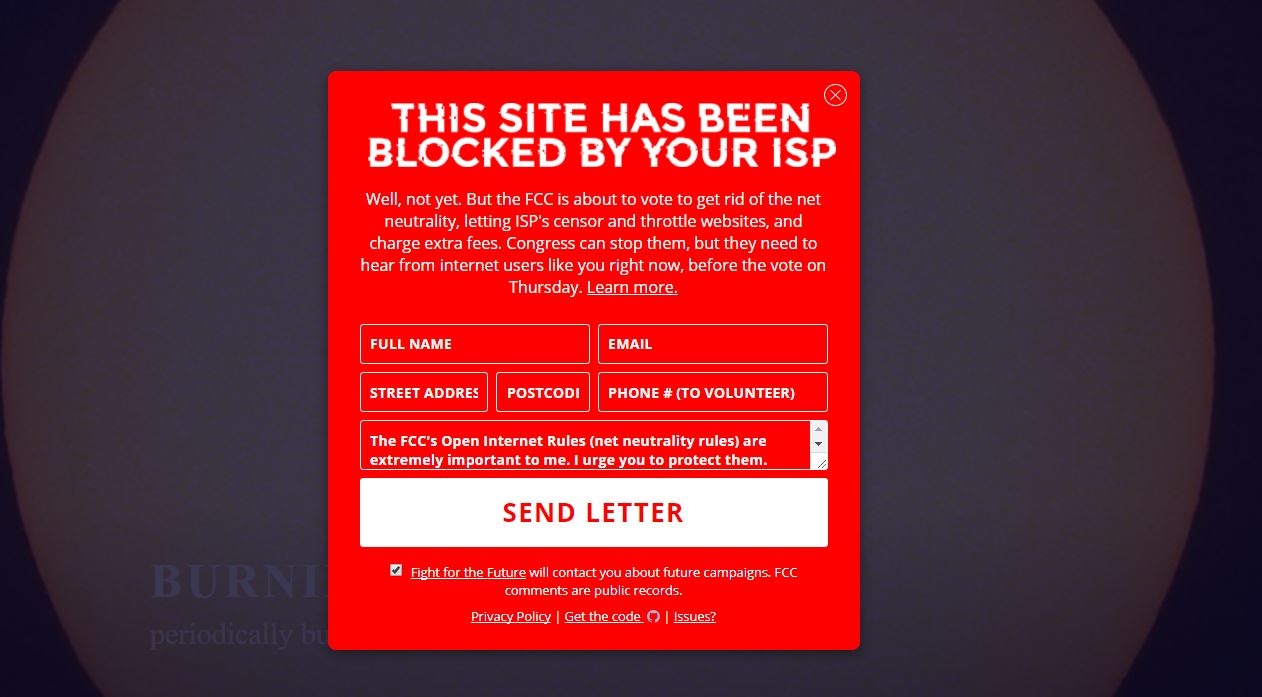 Earlier today I was stunned to read about the accusations of sexual harassment against Robert Scoble.  We aren’t friends, but we have friends in common and we have interacted remotely in the past.

I had no idea, no clue, that Scoble had harassed women. There are some people you might suspect of doing so, and some people you don’t, and before today I would have listed Scoble in the latter category. It just goes to show that on the internet, people don’t always know you’re a dog.

END_OF_DOCUMENT_TOKEN_TO_BE_REPLACED

My main site, where I write on everything but tech